It’s that time of year: changing colors, shorter days, cooler weather, and crisp leaves underfoot… Autumn is upon us, and it’s one of the best seasons to visit London. It’s also the time of year when many people celebrate holidays related to the longer nights and spooky season. Even if you’re not from the U.S., you might partake in Halloween festivities, or the ancient Celtic festival of Samhain from which it takes its roots.

One of the most popular ways is by seeking out those places where spirits who’ve gone beyond the veil still walk our mortal realm – and I’m not talking about cheesy haunted houses with guys in masks and fog machines.

As a city that dates back millennia, there are plenty of spooky spots and haunted places in London. From iconic sights to lesser-known museums and even a few tours and experiences that crank up the fear factor for entertainment, here are the spookiest haunted places in London to make the hair stand up on the back of your neck or a chill go down your spine.

The Tower of London is one of the city’s most popular landmarks, and these photos might look pretty cheery – but it belies the dark history of this site, and why happens to be one of the spookiest haunted places in London. But, to be honest, this doesn’t come as a surprise once you learn the tower once used to be the world’s most dreaded prison.

Rumor has it that not one, but thirteen spirits are residents of the Tower of London. Some were royals, and others were common civilians who had the misfortune of being imprisoned and later executed, here. Here are a few names you may recognize: Anne Boleyn, the second wife of Henry VIII, has been seen on Tower Green where she was beheaded. Sir Walter Raleigh, who was accused of treason, likes to wander around the Bloody Tower. Arabella Stuart, a cousin of King James I, also lurks in the castle’s corridors and towers.

Bodiless screams, shadowy figures captured on film, spinning wheel noises… these are just a few of the ghostly events taking place at Hampton Court Palace, despite its colorful Tudor exterior and decadent interior.

Like many other royal buildings, Hampton Court Palace’s history is tainted by death, violence, and disgrace. The property witnessed the death of Jane Seymour, one of Henry VIII’s wives, who died from post-birth complications.

Workers report that Seymour appears as a pale figure on the Silverstick Stairs. Catherine Howard, the adulterous wife of Henry VIII who was beheaded, also roams the palace at night, screaming the same last words she pronounced the day of her execution.

Tottenham is known for its magnificent stadium and bustling atmosphere. No one would have imagined it’s also home to Bruce Castle, one of the most famous spooky spots in London.

The story goes that a young woman, named Lady Constantia Coleraine, leaped off the castle’s balcony to leave her dreadful life behind – it seems her husband kept her under lock and key after she found out about one of his affairs. For some reason, committing suicide is a sure way to become a ghost after death. And that’s exactly what happened to Lady Constantia. She can be seen every November jumping from the same balcony.

50 Berkeley Square used to be considered one of the most haunted places in London in the late 19th Century. Today, this fancy house in Mayfair serves as the building for Maggs Bros, an antiquarian book dealer. However, stories of suicide and cruelty hide behind the elegant facade.

Numerous spirits seem to haunt 50 Berkeley Square, and the attic seems to concentrate all the paranormal activity. Allegedly, Thomas Myers, who lived in the house until the early 1870’s, moved into the attic after being rejected by his fiancée. Another story mentions Bloody Bones, a little girl who was murdered by a servant. She also seems to be wandering in the attic. As if these unnerving episodes weren’t enough, another story claims that a young man was locked in the attic room and fed only through a hole in the door, until he slowly turned mad.

So as to dial down on the spookiness, the British Museum is an excellent place to explore the philosophical aspect of death through the eyes of different cultures.

The museum houses marvelous collections of objects that have been used in Latin America, Africa, and Asia to commemorate or immortalize the rites of passage to death and the afterlife. A few worth seeing are the Colombian death masks, Japanese coffins, and the ancient Egypt exhibits with the mummies and the tomb-chapel of Nebamun.

For another creepy aspect, The British Museum also sits over an abandoned Tube station of the same name, which you can spot when riding the Central Line from Holborn to Tottenham Court Station. Learn more about London’s “ghost” stations.

From the outside, The Old Bailey, whose name is the Central Criminal Court, looks like a regular British court building. However, the property is a hotspot for London ghosts. Perhaps, this has to do with the fact the building sits on the former site of Newgate Prison.

Locals claim that a ghostly figure wearing 18th-century clothes can be spotted on the roof. Some believe this is the spirit of Jack Sheppard, a thief who escaped multiple times from prison before he was hanged at Tyburn. Others believe it’s the ghost of a man who was wrongly accused of being a highwayman and later executed.

Otherworldly events and mysterious happenings are the norm at Liverpool Street Station. The CCTV system has captured uncountable strange figures wandering the station during the night, and passengers have reported seeing a male figure wearing white overalls and carrying a box of tools as if “he’s going to work,” oftentimes on the Central Line platforms of the London Underground.

These events were explained after an excavation project revealed that Liverpool Street Station used to be a burial ground. During this excavation, around 30 bodies of victims of the Great Plague were uncovered.

If you love paranormal activity, by all means, visit Highgate Cemetery, one of London’s most fascinating cemeteries and one of the “Magnificent Seven.”

As one of the most haunted places in London, Highgate Cemetery isn’t home to regular ghosts. No, no, it’s haunted by a vampire. Allegedly, the vampire was a medieval nobleman who practiced black magic in Romania. His followers brought the coffin from Europe to England in the 18th century and buried him at the site that eventually became Highgate Cemetery. The vampire remained calm in his coffin for years, until a group of Satanists performed a ritual that woke him up.

Today, Londoners swear you can see the vampire lurking in the darkness.

The Old Operating Theatre Museum is Europe’s oldest surviving surgical theater. As you may know, medicine was pretty raw in its beginnings. Sometimes due to the lack of proper instruments and others due to the lack of regard for the patient’s life. Either way, patients went under tortuous interventions that sometimes ended up with their death.

Despite being a museum today, the Old Operating Theatre Museum was an actual surgical practice back in the 17th Century and welcomed mainly female patients who’d come here to receive the medical treatment they couldn’t afford. Many of the female patients that didn’t survive are said to haunt the museum. The staff has reported seeing a sad, old woman wandering the halls.

The Ten Bells is an iconic British pub in Spitalfields frequented by Londoners and travelers alike. But it seems that human beings aren’t the only patrons of the pub. The Ten Bells has a strong connection to Jack the Ripper. Yes, you heard it well: London’s infamous serial killer purportedly went into his cups here.

The pub owner claims that the venue is haunted by the ghost of Annie Chapman, who was murdered by Ripper in 1888. There’s also the ghost of an old landlord and the staff has seen tables flying and chairs moving. If you’re willing to trade people-watching for some ghost-spotting, then pop by The Ten Bells.

Many will be surprised to learn that the Spaniard Inn, a fancy hotel with wood-paneled walls, vintage décor, and lavish collections of wines and spirits, is home to four spooky ghosts.

The most recurrent one is the spirit of Dick Turpin, a highwayman who ambushed and robbed passing coaches. His horse, Black Bess, can also be seen roaming the grounds. The third ghost is named Black Dick. He’s said to have been run over and killed by a horse outside the inn. Last but not least, is the ghost of Juan Porero, a former owner who fell in love with the same woman as his brother and to settle the point decided to duel. Unfortunately, Juan died in the confrontation and it seems that his ghost decided to remain in the spiritual realm.

If you love ghost stories, these tours are just what you need. Each tour takes you to explore haunted London locations with a guide that will tell you the dreadful events that surround the places and have given rise to the ghosts and ghouls that frequent them.

The London Dungeon is a classic London ghost tour. It invites you to learn about the most macabre events in London’s history. The venue recreates historic scenes with actors in period clothing and also uses thrilling rides and special effects to make it even more realistic.

Located under the iconic bridge, The London Bridge Experience is a two-part tourist attraction. The immersive tour takes guests through the history of the bridge and then descends into a haunted house-style maze situated in the old site of the London Tombs, deep below London Bridge station.

The Ghost Bus Tour takes you to discover the dark side of London on a double-decker bus, dubbed the Necrobus. The experience is the perfect blend of history lessons, ghost stories, and comedy gigs. You’ll tour burial grounds, London haunted places, and even some landmarks.

Oftentimes, reality is even scarier than fiction. The murders committed by Jack the Ripper are an excellent example of that claim. Jack the Ripper Walking Tours aren’t about ghost stories, but about the location where his victims were found. Nonetheless, I assure you that once you’re walking down the dark alleys of Whitechapel while hearing how the Ripper murdered his victims you’ll feel a shiver running up your spine.

Are you up for visiting these spooky spots and haunted places in London? Let me know any questions you have about them in the comments below. 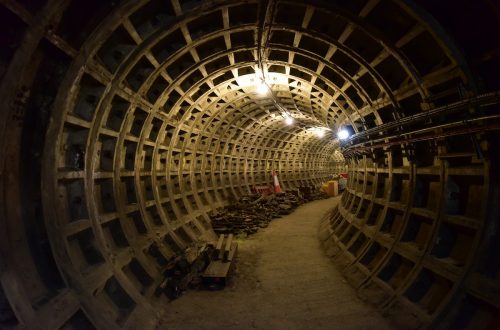 London Ghost Stations: What to Know & How to Visit 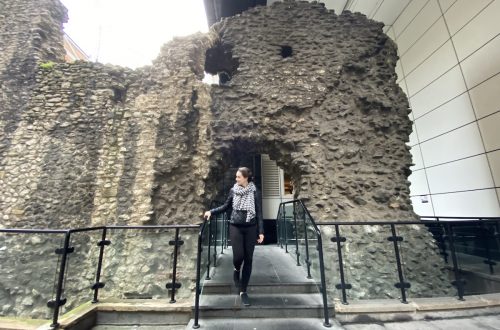 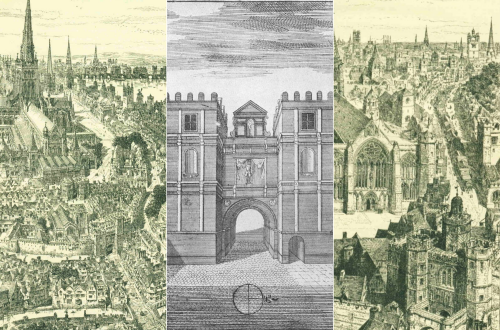